Ilona Martonfi, author of The Sow Kimono and Salt Bride, introduces yūgen, Yosa Buson’s haiga, calligraphy, round nibs, brush and ink. She will offer a tanka sequence “Elegy”, a free verse “Ghost of the Tsunami”, the haiku sequence “Chernobyl Pianos”, and a witness poem “Bestiary”, from her new collection, The Tempest forthcoming with Inanna Publications, 2022.

She will also introduce you to her family behind the Iron Curtain. Share a censored letter from her aunt Vilma, from Budapest. Define the local Ukrainian name for mugwort or wormwood (Artemisia vulgaris), as “Chornobyl”. And how in spring 1986, the wind took the Chernobyl radioactive cloud, and started to spread it above Europe.

Word of the Day Yūgen:

“Yūgen in the criticism of Japanese tanka poetry, was used to describe the subtle profundity of things that are only vaguely suggested by the poems. Yūgen is said to mean a profound, mysterious sense of the beauty of the universe and the sad beauty of human suffering.” —Wikipedia

The Haiga: Haiku, Calligraphy, and Painting

“Submit to nature, return to nature,” wrote the seventeenth-century Japanese poet Matsuo Bashō, thus capturing the beauty and simplicity of the haiku: a seventeen-syllable poem traditionally depicting a fleeting moment of a given season. The same can be said of the haiku’s more visual cousin, the haiga, which unites a haiku poem, written in calligraphy, with a simple painting. Haiga paintings, like the haikus accompanying them, are usually restrained, with minimal ink brush strokes and light colour.” 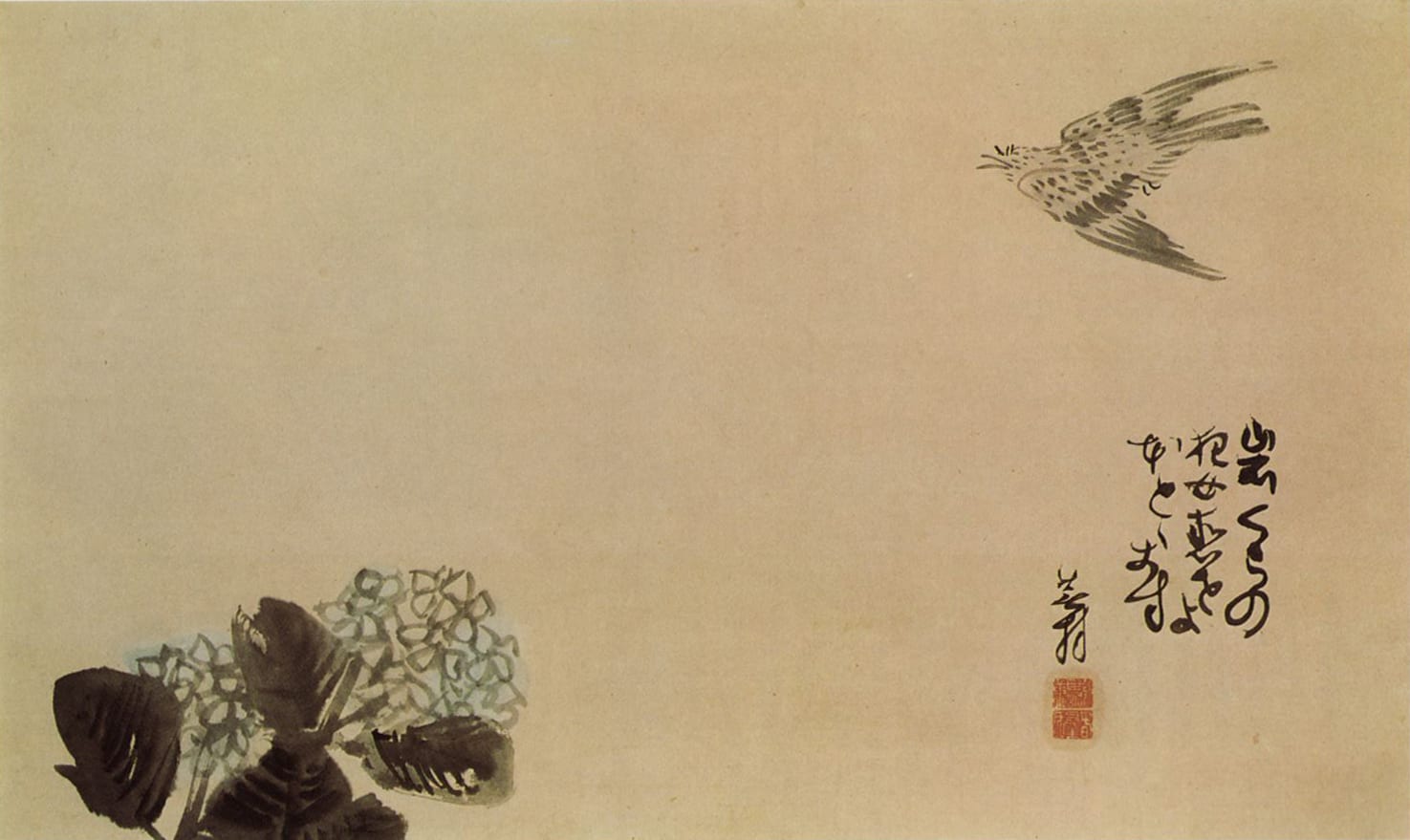 (File: A little cuckoo across a hydrangea (Haiga) by Yosa Buson.jpg / Wikimedia)

“Ambitious in ideas and form, the rhythm of Ilona Martonfi’s poetry shifts effortlessly between the soothing hum of the natural world and the energetic buzz of urban life. Hers is a powerfully original voice that keenly examines animal and human worlds, capturing their beauty and tragedy in equal measure. I was utterly captivated by this new collection.”
– Darren Richard Carlaw, Editor, StepAway Magazine

During my writing I am inhabited by vivid images, sounds, smells, tastes and feelings. This time I offer a part of my soul. Cloistered in my downtown Montreal loft which protects from the outside and the others. My sense of love for life, cut with the darknesses and the violences of my poems. I search this voice, in an invisible memory, which connects in me as a researcher and web-surfer to an online author community. Blogging about The Tempest is addictively fun. Carrying the best elements of a journal, I love the steps each blog takes to write. As always, grateful to Inanna for posting them.

The 869 Sanriku Earthquake and Tsunami

“The 869 Sanriku earthquake and its associated tsunami struck the area around Sendai in the northern part of Honshū, Japan’s main island, on 9 July 869 AD (or the 26th day of the 5th month in the 11th year of the Jōgan era).” —Wikipedia

The 2011 Tōhoku Earthquake and Tsunami

“The earthquake that struck Japan on 11 March 2011 was the fourth most powerful in the history of seismology. It knocked the Earth six and a half inches off its axis; it moved Japan four metres closer to America. In the tsunami that followed, more than 18,000 people were killed. At its peak, the water was 40 metres high.”
www.theguardian.com › world › aug › the-school-bene…

“Refugees are people who must leave their home area for their own safety or survival. A refugee’s home area could be a country, state, or region. People become refugees for many reasons, including war, oppression, natural or man-made disasters, and climate change.”
www.nationalgeographic.org › encyclopedia › refugee

Fukushima: The Day of Black Snow

“Toru Anzai remembers the day as the “black snow” day. He heard the explosions on Friday 11 March, 2011. Black smoke rose from the Fukushima nuclear power plant, and the smell of burning iron pervaded the village. It started to rain. The rain turned into snow. The snow was black.

Toru Anzai is a former resident of Iitate, a small village in Fukushima Prefecture located in the Tōhoku region, Japan, and dearly missed the bamboo shoots that grew in his hometown. During autumn, the bamboo shoots would blanket the mountains that overlooked the residents’ homes in the village. The residents would climb the mountains, gather the plants, and prepare them for dinner. But ever since that tragic day, no one climbed the mountains, and the wild plants vanished from their dinner tables. For Anzai, the bamboo shoots became sad reminders of what used to be.”
www.greenpeace.org › international › story › fukushima…

“Tanka is a short unrhymed lyric poem with syllables of five, seven, five, seven and seven. Tanka, or “short song”, also uses many literary devices, including personification, metaphors, and similes to allow ample visualization. The theme of tanka can be anything from love poems to depictions of everyday life, social issues, and stories. Midway through a tanka, there’s a change in perception. There’s a “pivot” in the third line. The change occurs as a transition from examining an image to examining a personal response.” —Wikipedia

Ghosts of the Tsunami

“The Okawa Elementary School was by a big river. And like other schools all over the area, when the earthquake struck that afternoon they knew exactly what to do. They got under their desks at first. Then the teachers escorted them outside, they lined up in their classes, and their names were ticked off. And everyone was fine.

The problem is that unlike many other schools along that coast, they stayed put. They stayed in the playground. There was a hill behind the school where within five minutes they could have been safely out of reach of any disaster. But they didn’t climb it. And 51 minutes later the tsunami came and rushed in. The children scattered. And all but four of the 78 children and all but one of the 13 teachers who were in the school at the time perished.”

Section V from The Tempest, a free verse “Ghost of the Tsunami” knows grief and loneliness and responds with the urgent percussion of excavators.

…calling her name Koharu, Koharu
Akira Ishii digs with an excavator
looking for her daughter
[…]

She has to bring her home
rub the mud from her face,
wipe it off her eyelid

“The wind took this enormous radioactive cloud and started to spread it above the European Continent.”

Black Rain Behind the Iron Curtain: Letter from Aunt Vilma

A censored letter from my father’s elder sister, aunt Vilma, who had lived with my late grandmother Rosalia in Budapest, spoke of “being drenched in black rain that made the air taste metallic.”

“We grow borsó, peas, and tomatoes,” she says. “I bake homemade krumplis kenyér, potato bread, that yes, is with radiation. […] I queue up for milk, for eggs, for lard. Then I rush to catch the streetcar. […] Yesterday, I began coring carrots for supper, discarding the middle and soaking the hulls in water. Radiation collected in the center, on the skin of fruit and vegetables.”

I imagine each street, each huddled person, each acacia tree. A collection of grey. The electrified barbed wire, and watchtowers. Secret police. And shortages. Wild flowers lining the roads. I imagine my beautiful hometown.

“The essence of haiku is a cutting word between them, a kind of verbal punctuation mark. Traditional haiku consist of 17 syllables in three phrases of 5, 7 and 5. A kigo seasonal reference juxtaposed with human nature.” —Wikipedia

Pleased to share a haiku sequence “Chernobyl Pianos” to appear in The Tempest. Published in Moth chapbook (Cactus Press, 2020). 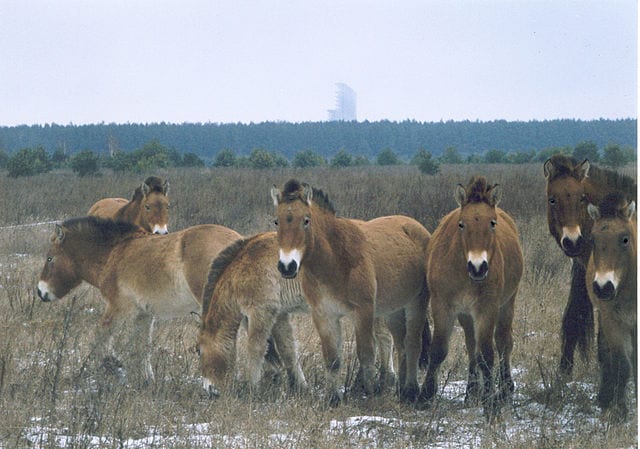 “A documentary film is a non-fictional motion-picture intended to document reality, primarily for the purposes of instruction, education, or maintaining a historical record. A cinematic tradition, and mode of audience reception [that remains] a practice without clear boundaries.” —Wikipedia

The Babushkas of Chernobyl:

“At her cottage, Hanna Zavorotyna brews homemade moonshine and slices thick chunks of salo, raw pig fat – though it is strictly forbidden to eat local food. “Starvation is what scares me, not radiation,” she says. That stark choice reveals an incredible journey the women have traveled: from Stalin’s enforced famines in the 1930s, through Nazi occupation, to nuclear disaster. Like the wolves, moose, wild boar and other wildlife not seen for decades that have come back to the abandoned forests around Chernobyl, the women of the Exclusion Zone, too, have an extraordinary story of survival, and offer a dark yet strangely affirming portrait of life post-apocalypse.”

www.imdb.com › title The Babushkas of Chernobyl (2015)

A witness poem “Bestiary” forthcoming in The Tempest and published in my chapbook Moth (Cactus Press, 2020).

At night we morph into paraboles of light.
Us, radioactive albino dogs. Wild boar. Wolves.

forests are not decaying
bog cranberries. Peat moors,
the bruises of summer skies
we watch you drive to the pear trees
still holding the casket
[…]

“The third angel blew his trumpet, and a great star fell from heaven, blazing like a torch, and it fell on a third of the rivers and on the springs of water. The name of the star is Wormwood. A third of the waters became wormwood, and many died from the water, because it was made bitter.” (Rev 8:11)

Founded in 1193 the city name Chernobyl is the same as the local Ukrainian name for mugwort or wormwood (Artemisia vulgaris), “chornobyl”. —Wikipedia

“‘We didn’t know it was the reactor. No one had told us. Grigorii Khmel, the driver of one of the fire engines, later described what happened: We arrived there at 10 or 15 minutes to two in the morning. We saw graphite scattered about. Misha asked: “Is that graphite?” I kicked it away. But one of the fighters on the other truck picked it up. “It’s hot,” he said. […] We didn’t know much about radiation. Even those who worked there had no idea. There was no water left in the trucks. Misha filled a cistern and we aimed the water at the top. Then those boys who died went up to the roof—Vashchik, Kolya and others, and Volodya Pravik … They went up the ladder … and I never saw them again.” —Wikipedia

Ilona Martonfi is an editor, poet, curator and activist, author of four poetry books, her most recent title is Salt Bride (Inanna Publications, 2019). Forthcoming, The Tempest (Inanna Publications, 2022). Writes in seven chapbooks, numerous journals across Canada and abroad. Recently, her poem “Dachau Visit on a Rainy Day” was nominated for the 2018 Pushcart Prize. She is the founder and curator of Visual Arts Centre Reading Series, and Argo Bookshop Reading Series. She is also the recipient of the Quebec Writers’ Federation 2010 Community Award.