Review and consider these important new titles for courses that explore women’s writing and women’s literature.

Please consider requesting complimentary examination copies of these books for possible use in your upcoming courses, and visit our online academic highlights catalogue and our academic flyers to discover additional titles of interest to English Literature faculty.

Inanna Publications and Education Inc. (1978-) is one of only a very few independent feminist presses remaining in Canada. More on our company here: https://www.inanna.ca/ 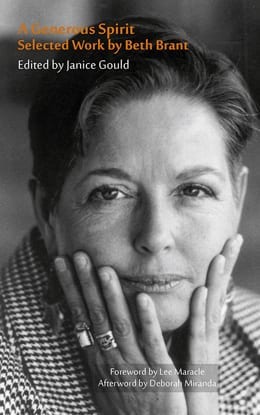 A Generous Spirit: Selected Work by Beth Brant collects the writing of Beth Brant, Mohawk lesbian poet, essayist, and activist. During her life, Brant’s work gave voice to an often unacknowledged Two-Spirit identity, and today, her words represent continued strength, growth, and connection in the face of deep suffering. A Generous Spirit is Brant’s portrait of survival and empathy at the intersection of Native American and lesbian experience. Edited by noted Native poet and scholar Janice Gould, A Generous Spirit recounts and enacts the continuance of her people and her sisters with distinct, organic voices and Brant’s characteristic warmth. Her work is a simultaneous cry of grief and celebration of human compassion and connection in its shared experience. Through storytelling, her characters wrest their own voices from years of silence and find communion with other souls.

“Beth Brant gave us Indigenous feminism and Indigenous queer theory even before we had a name for these practices, all wrapped up in the most beautiful storywork. Highly valuable for its literary as well as its theoretical contribution,”

—Kim Anderson, author of A Recognition of Being: Reconstructing Native Womanhood 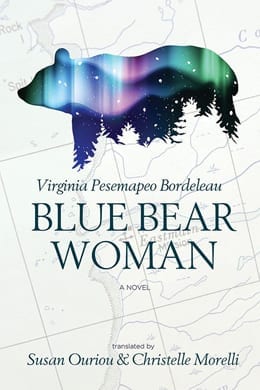 Blue Bear Woman is the first novel written by an Indigenous woman that was published in Quebec in the French language. The story of a young Cree woman’s search for her roots and identity, Virginia Pesemapeo Bordeleau’s debut novel, Ourse bleue, was originally published in 2007, and is her second novel to be translated into English. The novel explores contemporary Indigenous life and the impact on the Cree of the building of the Eastmain dam in northern Quebec, posited as “virgin” territory, yet which has actually been part of the Cree traditional territory since time immemorial.

“Virginia Pesemapeo Bordeleau creates a world where tragedy and triumph travel side by side. Alternating between the realities of darkness and light, between past and present, the author’s main character ultimately celebrates strength in spirit. The reverence shown towards the Cree history, culture and people of Northern Quebec takes the reader on a journey, filled with stories that no longer wish to be hidden. No longer left untold.” The Envy of Paradise by Jocelyn Cullity (October 2019)

In 1858, the British took over the city of Lucknow, paving the way for Queen Victoria’s reign over India. But what happened to Begam Hazrat Mahal, the woman of African-Indian descent who had valiantly organized a final key resistance to British rule, and to her ex-husband, Wajid ‘Ali Shah, the last King in India, who remained imprisoned by the British? The Envy of Paradise tells their stories.

Jocelyn Cullity’s English family lived in India for five generations. A sequel to the award-winning Amah & the Silk-Winged Pigeons, her second novel about the takeover of India by Britain is an exquisitely told tale of 19th-century India — a deep rendering of the moment that India as a country was colonized; a brilliant illustration of Hazrat Mahal’s fearless character and the depths of betrayal the last King in India faced.

“A footnote to the Indian Mutiny is here enlarged, polished like a jewel, and presented in a dazzling story of resistance against British domination. Loss of personal liberty is set against loss of a kingdom in a subtle and evocative narrative. Warmly recommended.”

— Rosie Llewellyn-Jones, author of The Great Uprising in India 1857-1858 and The Last King in India

If you are interested in examination copies of any of our titles for course consideration, please click here.

Inanna Publications titles are peer-reviewed, and widely used in courses in Canada and the United States.