“These hook-beaked songbirds with a raptor’s habits skewer their prey of small birds, lizards, and insects with thorns, the spikes on barbed-wire fences. This helps the shrike to tear the flesh into smaller, more conveniently sized fragments, and serves as a cache so that it can return to the uneaten portions at a later time. The common English name shrike is from Old English scrīc, alluding to the shrike’s shriek-like call.”
⁠—Wikipedia

Sounds of the Border: Playing the Wall

Line editing and revising Section I of my fifth poetry book The Tempest (Inanna, 2021), I read aloud my witness poem “Border Wall”. Take copious notes in a spiral notebook. Stumble across musician and activist Glenn Weyant from Tucson, Arizona. I now have a great opening poetry line. It is told from a first-person viewpoint:

What is the music?

I’d like to ask you who is
strumming a cello bow to razor wire.
[…] 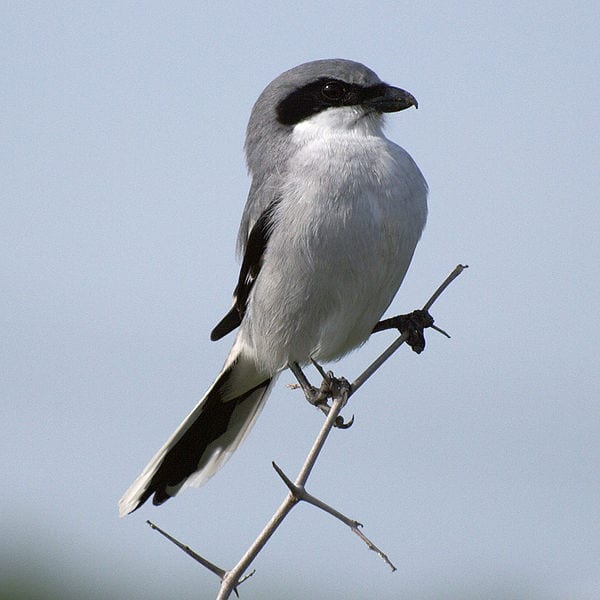 “A classical, experimental artist, Glenn Weyant travels through open landscapes of grasslands, mountains, and expansive horizons through Arizona in a day of deep desert listenings and field recording.

Using drum mallets, a cello bow, and a viola, he started to play. It began with bizarre, alien warbles, some clicks and snaps, then echoes looping back in on themselves, oscillating in droning waves. He rattled a wire drum brush between the beams and even pounded a mallet against Mexican soil. He squealed into a moose call, sounding like a horse screaming in pain. Then he faced the tower, pulled out the viola, and began creaking on it. It sounded beautiful at first, but quickly became harrowing, the kind of agitating strains common to horror flicks. There was an extended, ringing lull before he took the bow to the fence, sliced at it, made it snap and squelch like crumpling cellophane. Finally, everything purred and faded out. He faced the tower and took a bow.

I would love to set up a day, he said. Where people from the U.S. side, musicians on the Mexican side would agree to meet on either side of that wall and then start playing it, to actually join together and take this wall and demolish its concept, remove it as a wall. It will no longer exist as a wall. It will be an instrument.”

“A play is a work of drama, usually consisting mostly of dialogue between characters and intended for theatrical performance rather than just reading. The performers may communicate this experience to the audience through combinations of gesture, speech, song, music, and dance. Elements of art, such as painted scenery and stagecraft such as lighting are used to enhance the physicality, presence and immediacy of the experience.”
—Wikipedia

The Shrike, a play by dramatist Joseph Kramm, is a re-boot project by Ilona Martonfi.

The play, set in 1951, in a fourth grade classroom in the Bavarian refugee town Pirka, is based on the story of a nine-year-old girl named Ilka from Budapest, who is driven to keeping a secret by her pedophile teacher.

To outsiders Anton Mathes, the teacher with a slight lisp, seems to represent respectability, conductor of a children’s choir, and family man, father of two small boys. In reality, he is a pedophile. Like the shrike, a predatory bird that kills and skewers its prey, the teacher seems harmless but his grooming of Ilka deprives her of her volition. her free will, and power of choice.

The play is written in a documentary style focusing on the daily experiences of the main character as she tries to navigate the world of going to school and the secret.

Ilka’s point of view dominates the play, as she struggles to cope with the abusive situation she finds herself in.

She comes to realize that the only way to secure her freedom is by learning her reading, writing and arithmetic, and not making an ink splotch in her notebook. In the end, we see Ilka holding her report card: “Ilka is a quiet, hard working girl. Promoted! Lehrer Anton Mathes.”

As a result, audiences get a portrait of a girl being sexually abused who ultimately loses her innocence.

Symbolism in the Play Illustrates and Reinforces Themes

In the opening act Martonfi uses foreshadowing to imply Ilka’s fate on the first day of fourth grade. The teacher gives her a pet name, “Schwarze, come and write on the blackboard.”

The teacher sitting behind a huge oak desk, his brown leather bag leaning on a wooden chair, he reaches out and touches her knee above the white ribbed knee sock. Suggests that the smell, the confusing mix of fear. The freezing. It was Ilka’s only escape from this classroom. In another scene, Ilka is shaking hands with the teacher, “Good morning!”

The title of the play becomes a symbol of its main action. The teacher serves as the shrike in the play as he fondles Ilka during movie days. He effectively prevents Ilka from escaping by summoning her to the back of the classroom, “Schwarze sit back here on this bench.” Lowered blinds. Film reels clicking. He stands behind her, his body in the dark, her flowered cotton dress, her pigtails.

A Study Guide for Joseph Kramm’s “The Shrike”
books.google.ca › books 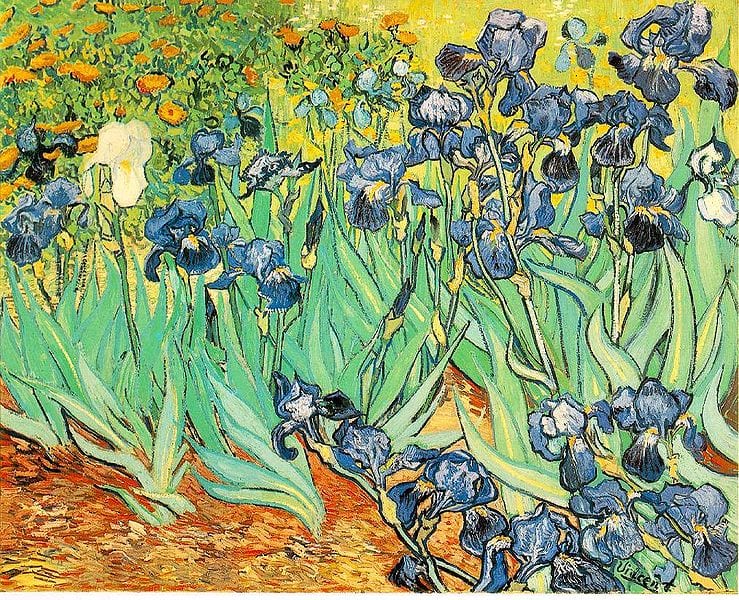 “The word comes from the Greek ἐκ ek and φράσις phrásis, ‘out’ and ‘speak’ respectively, and the verb ἐκφράζειν ekphrázein, “to proclaim or call an inanimate object by name”. According to the Poetry Foundation, “an ekphrastic poem is a vivid description of a scene or, more commonly, a work of art.” More generally, an ekphrastic poem is a poem inspired or stimulated by a work of art.”
⁠—Wikipedia

In love with oils and canvases I wrote an ekphrastic haiku sequence “Van Gogh’s Irises” to be included in Section II of The Tempest: haiku a form that seeks to capture the moment.

I want to tell you that I think I have done well to come here, because, by seeing the reality of the assorted madmen and lunatics in this menagerie, I am losing my vague dread, my fear of the thing. And bit by bit I am getting to consider that madness is just a disease like any other. Thus the change in surroundings will do me good, I think.

As far as I can tell, the doctor here is of the opinion that what I have had is some sort of epileptic attack. But I haven’t asked him more about it.

Have you received the case of paintings, I am curious to know if they have suffered, yes or no?

I have two more on the go – violet irises and a lilac bush, two subjects taken from the garden.”

The Inanna Author Questionnaire: Myth and Metaphor in The Tempest

Filling out the Author Questionnaire for my collection, The Tempest, I visualize the cover artwork by Klee, his purple Hermitage watercolour, designed by talented Val Fullard at Inanna. I also send a special thank you note to Luciana Ricciutelli, Editor-in-Chief, for her belief in this book.

Like the mythological figure she describes as “ensnared in long tentacles of hair, skeletal, toothless, chiseled in white marble”, Martonfi has hewn her own spare lines to recast her book’s obsession with the politics, violences, and musics of the oral.

Bearing witness to the truth, Martonfi’s The Tempest is invested in poetry that attempts to reveal human pain through the art of words. A topic with which she is familiar. A topic about which she is passionate.

Each poem is powerful, but the book’s strength comes from its collective voice: different political conflicts, cultures, genders, ages, races — one shared human narrative. As we follow these survivors into their past and present lives we learn that poetry was the gift that restored.

In “The Ugliest Girl” she quotes the themes of pedophilia and predation. A free verse poem from Section II, it uses the word “you” to describe the main character.

At that age, you
grow wild irises in your elegy
use watercolours
somewhere, some time
[…]

to unremember
summer flowers crying
shot in black and white
you wait for. Fourth grade

oak door, a room
teacher has his lisp,
a motion picture

running on the wall.
Teacher’s hands.

To wed the “political” with the “personal” the pathos of this book is plain. Poems call out and talk back. Expose truths, raise consciousness, one clipping at a time, The Tempest, does collage but makes deliberate choices when Martonfi puts the pieces together. Each item, cut out, becomes one more word, one more symbol.

And the poems emerge and they sing of those times. What she found was that the human soul endures in the poetry.

Divided into five parts, the first section leading to death camps and across time to more recent events such as the Chernobyl nuclear disaster bring our attention to rhythms in language, in sentences, in thinking, in time.

A free verse poem in Section II, “The Necklace”, tells us about her mother’s attempted suicide with sleeping pills. A writer bringing myth and metaphor to poetry:

My mother had a red coral necklace,
which I played with as a child.
Red smooth glass.
Oh so berry red.
[…]

moving the witches from room to room
while my mother stayed in the hospital.

The book’s wanderings in and out of forms signal its approach to some important obsessions. Tales of love and rage, displacement and homecoming. Budapest and its lilac hills above the Danube, where bombs fall. Where cattle wagons wait for Jews to be deported to Auschwitz. Where her family lives in Pirka, a Bavarian war refugee settlement. Immigration to Montreal’s ice and snow, founding a family, fleeing domestic violence.

Martonfi’s collection, The Tempest, transforms into a water-colourist’s terrain. The bricoleur who uses personal resources to gain access to the past and to formulate the present.

Ilona Martonfi is a poet, editor, advocate and activist; she is the author of four poetry books, Blue Poppy (Coracle Press, 2009), Black Grass (Broken Rules Press, 2012), The Snow Kimono (Inanna Publications, 2015) and Salt Bride (Inanna Publications, 2019). Forthcoming, The Tempest (Inanna Publications, 2021). Her work has published in six chapbooks, numerous journals across North America and abroad. Recently, her poem “Dachau Visit on a Rainy Day” was nominated for the 2018 Pushcart Prize. She is the founder and Artistic Director of The Yellow Door and Visual Arts Centre Reading Series, and Argo Bookshop Reading Series. She is also the recipient of the Quebec Writers’ Federation 2010 Community Award.