In the beautiful summer of 2017, doors and windows wide open to sunshine, I am ordering my fifth poetry collection, The Tempest. I can still picture that first sighting of the book cover: Paul Klee’s Hermitage, 1918, blue pencil, medium watercolour on chalk.

“In Hermitage Klee turns away from the present, to find refuge in a fairy tale world. He invents his own abstract landscapes, in which nature, animals, plants and celestial bodies play the main part.”
—Eileen Kinsella / artnet News 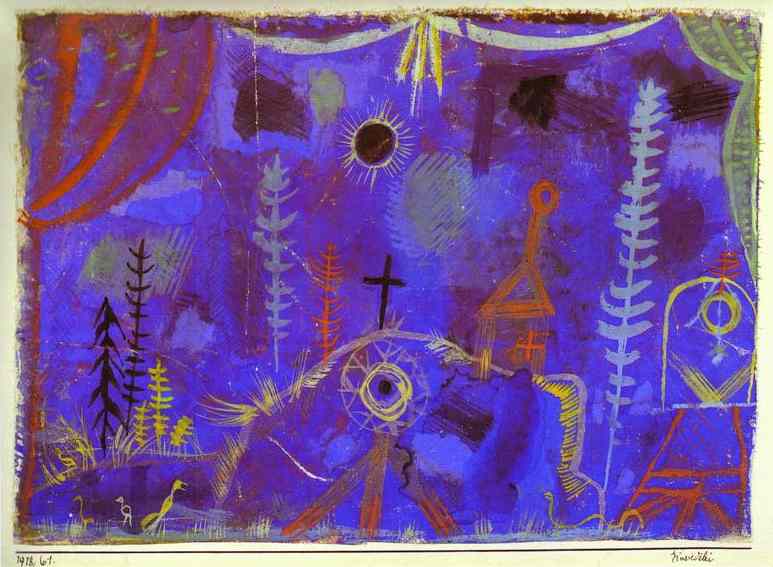 Advance Praise for The Tempest

Words can be weapons, and Ilona Martonfi’s The Tempest isn’t afraid to wield them with a delicate and certain hand. It is difficult to put into words, the power of her work though I often find myself needing to take a long breath after each poem. The words resonant innate truths through the lens of other, mysterious worlds. And yet they’re more than that. Martonfi’s poetry reaches out of the page and demands the reader bear witness to the void, the sublime darkness. Deep trauma is interwoven with seemingly small and domestic moments in time and history that speak to the emotional landscape that underlies reality and the essence of the human experience.
—Simone Pitot, singer, multi-instrumentalist and composer

“Elegy which may be traced to the Greek word elegos, “song of mourning” commonly refers to a song or poem lamenting one who is dead; the word may also refer somewhat figuratively to a nostalgic poem, or to a kind of musical composition.”
—Merriam-Webster

Poetry giving voice to the dance. The unattractive. Faceless and abject. The figure of the predator. In The Tempest Section II, a free verse poem “The Ugliest Girl”, I am nine, in fourth grade, abused by a pedophile teacher. “The Necklace”, my mother Magda’s attempted suicide on Easter Sunday, with sleeping pills.

I feel very young. How old do I feel? Nine. A war refugee child from Budapest living in Bavaria. Exiled from my homeland, Magyarország behind the Iron Curtain. Immigrant to Montreal, Canada, at age twelve.

As a child, one night I hear footsteps, the door opens, and death comes in. I run into my grandmother Mariska’s room, but death comes with me. So I remain fearful.

Today, I still have premonition dreams, but think less about death. I’d like not to have these dreams. I made a dreamcatcher, but it did not help. The only thing that does, is the work.

Dreams and auguries foretell the death of a sister, “A teszvéret meghalt” Your sister died. I write my dreams into a journal.

On November 17, 2017, at 7:10 PM, I receive the news in an email from my eldest sister Erna living in Los Angeles. One week late. Our youngest sister Erika from Ottawa has died. I write the prose poem, “Nox”. Google her obituary. Erika, who has not spoken to me in over a decade.

Erika Kaptein passed away on Thursday, November 9, 2017 at the age of 71. She will be deeply missed by her beloved husband Nicolaas, her dearly loved children… Erika will be lovingly remembered as an accomplished artist, poet,..

All I have left are my memories and an online painting posted on social media. Image rights: Erika Kristein Kaptein. Erika’s aqua green seashore painting, it has the rare gift of still seeming to leave so much unsaid, unanswered, unspoken. A sister never ends.

Cut-off in life. Now cut-off in death. Once we were five siblings. Four daughters and a son. Now we are two. Losing three siblings in four years, Eva (2014), József (2015), and Erika (2017). Long-distance relationships, I didn’t attend their funerals. Haunt their digital platforms they created. Cut and paste archived obituaries into my notebook. Create virtual memorials.

My elegiac poem “Nox“ (Latin for “night”), sings out a lamentation for my sister Erika.

“Throughout history, some poets have felt a moral or ethical imperative to bear witness in their poetry to events such as war, genocide, racism, corporate greed, dictatorial tyranny, and other acts of injustice.”
—University of Arizona: Poetry Center

I took inspiration from Vanessa Redgrave’s Sea Sorrow (Il Dolore Del Mare) film quoting Shakespeare from his play The Tempest, asking those who deride refugees to put themselves in their place: “…whither would you go? / What country, by the nature of your error, / Should give you harbour…?” It is a powerful point, and those lines bear repeating.

In Section I, I research the witness poem “Spiegelgrund”, a children’s hospital in Vienna during the Reich. Vienna of my childhood, where we fled to from Budapest to live in a war refugee camp. Section III, a prose poem “The Facility”, my eldest daughter, patient in a psychiatric ward. If she had lived in the 1940’s in Austria, she would have been gassed by the Nazis. I learn about Hungary’s dark history, Budapest trains vanishing into Auschwitz-Birkenau.

I take copious notes, collect images about migrants. Blue tents, cold and rain. Section V walks with a free verse poem “Calais Jungle” to the soup kitchen. I remember as a six-year-old living in Donaustauf, a suburb of Regensburg, in Allied-occupied Bavaria, their fast Jeeps. American soldiers ladling hot porridge with big plump raisins in my school.

Evocative and vivid imagery of free verse, prose poetry, erasure poetry, haiku, tanka, and haibun, insist on the reader giving each word a lingering attention. Its wanderings in and out of forms signal its approach to some important obsessions, exile and finding home.

Divided into five parts, in Section I, an ekphrastic haibun “Clotho, Goddess of Fate, Contemplates Tumours in the House of Claudel, in Montparnasse”, is inspired by the three Greek mythological goddesses of destiny, Clotho spinning the thread of life.

…Ensnared in long tentacles of hair, skeletal, toothless, I grow from the rock beneath.
Spinning uncolour of straw, chiseled in white marble…

…The wolf hour / Populated by hybrid figures. Fantastic beasts. Metamorphosis and
magic / Couldn’t seem to rid myself of any items that got lost, Christmas / decorations,
reels, oils / Anything. Also: everyone…

I, too, seem invested in

…The red brick house with two apple trees. The silences / one divested from the
violences of / Returning from violent earth water-damaged. The flooding. Impermanence
and decay…

“The science of climate change is unequivocal. Its negative social and financial consequences are clear, dire, and exponential…. And yet we have been unable to effect change at the necessary scale. We have failed, somehow, to humanize this issue…. A good poem reminds us of our shared humanity. A good poem will shock us out of our usual tropes. Remind us of everything we share and everything we put at risk.”
—Treehouse Investments

In Section V, a global warming themed poem “Bleaching” speaks to a “you”. Arranges a sequence of meaning out of the detritus of this modern human society, this Earth.

Section V, the free verse poem “Ghost of the Tsunami” knows grief and loneliness and responds with the urgent percussion of excavators.

…calling her name Kaoru, Kaoru,
Akira Ishii digs with an excavator
looking for her daughter’s head

Reflections on the mutilated nature, human tragedies, love – these are the main themes of my book. The Tempest is like a painting coming to life. Mailed to Inanna Publications in a brown envelope with cover letter December 1 2017.

The exciting news from Luciana Ricciutelli, Editor-in-Chief: “Just wanted to let you know that I met with my board last night, and presented them with your new manuscript, The Tempest, and I have confirmed that we would love to publish it!”

I would also like to share on this wonderful Inanna blog how honoured and thankful I feel for The Tempest book contract. And look forward to working with Inanna’s fantastic team.

Ilona Martonfi is a poet, editor, advocate and activist; she is the author of four poetry books, Blue Poppy (Coracle Press, 2009), Black Grass (Broken Rules Press, 2012), The Snow Kimono (Inanna Publications, 2015) and Salt Bride (Inanna Publications, 2019). Forthcoming, The Tempest (Inanna Publications, 2021). Her work has published in six chapbooks, numerous journals across North America and abroad. Recently, her poem “Dachau Visit on a Rainy Day” was nominated for the 2018 Pushcart Prize. She is the founder and Artistic Director of The Yellow Door and Visual Arts Centre Reading Series, and Argo Bookshop Reading Series. She is also the recipient of the Quebec Writers’ Federation 2010 Community Award.