From Spoken Word Artist to Novelist: We’re Not in Kansas Anymore 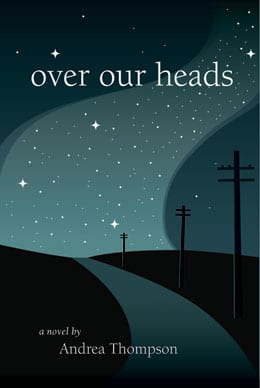 Andrea Thompson, author of Over Our Heads, writes about the experience of moving from Spoken Word to Novelist.

Publishing a novel was, for me, an epic journey. My first attempt, about ten years ago, began with my posting an innocently optimistic yellow sticky note above my desk, reminding me to: trust the process. Fast-forward one year, and there I was – surrounded by piles of paper, with said sticky note crumpled up at the bottom of the recycling bin. Although the piles of paper I was left with looked like a manuscript, they were, in fact, only a few scenes – written in past tense, in the present tense, from various points of view – the same scenes written over and over as I changed my mind again and again and slowly came to the painful conclusion that I had no idea what I was doing. I was in over my head.

So I decided to go back to school. At first I was thinking about the writing program at Humber College, but decided instead to apply for the Creative Writing MFA program at the University of Guelph. It was my birthday when I looked in my in-box and found a message from program Coordinator Catherine Bush. I was in.

What followed was two years of learning how to write fiction – a process that taught me to be kinder to my earlier budding-novelist self. Fiction was hard! During the first year of the program, I worked with Jeanette Lynes, who helped me craft the first draft by offering an incredible amount of patience and encouragement. In the second year, I began the manuscript as my thesis and began working with my advisor, Kathryn Kuitenbrouwer, who taught me the nuts and bolts of constructing a story arc (among many other things).

When I began to work with Kathryn, the manuscript was a mess. To my mind, it was beyond repair, so at our first meeting, I suggested I throw everything out and start again. But Kathryn reassured me. “Everything is in there,” she insisted.  “Everything you need to bring the story together is already there.” Incredibly, she was telling me the same thing I had told myself almost a decade before: trust the process. So I got to work. I read about William S Burroroughs using what he called the ‘cut up’ method, and decided to give it a try. I got out the tape and scissors, and turned my office into a replica of a movie set for “A Beautiful Mind.”  The insanity of editing had begun.

Two years later, with the assistance of Elizabeth Green, who talked me out from under the bed when I had once again given up, and Lucianna Ricutelli, Inanna’s Editor in Chief, whose editing abilities verge on the supernatural, the book was finally born.

The transition from short form to long form writing is like learning to run a marathon after a lifetime of sprinting, like being in a long-term relationship after a series of one-night-stands. The learning curve has been steep, but the rewards have been worth it. The story is finally out of my body. I’ve learned how to write a novel, and more importantly to trust myself, and the intuition that prompted me to put that sticky note up above my desk all those years ago. I had come full circle, and like Dorothy in the Wizard of Oz, realized I had what I needed all along.

– Andrea Thompson, author of Over Our Heads